While still a young man, Charles Darwin joined the scientific elite. When the Beagle returned on 2 October 1836, Darwin was already a celebrity in scientific circles as in December 1835 Henslow had fostered his former pupil’s reputation by giving selected naturalists a pamphlet of Darwin’s geological letters. Darwin went to Cambridge to see Henslow, who advised on finding naturalists available to catalogue the collections and agreed to take on the botanical specimens. Darwin went round the London institutions being fêted and seeking experts to describe the collections. Zoologists had a huge backlog of work, and there was a danger of specimens just being left in storage.

Charles Lyell eagerly met Darwin for the first time on 29 October and soon introduced him to the up-and-coming anatomist Richard Owen, who had the facilities of the Royal College of Surgeons to work on the fossil bones collected by Darwin. Owen’s surprising results included gigantic extinct sloths, a near complete skeleton of the unknown Scelidotherium and a hippopotamus-sized rodent-like skull named Toxodon resembling a giant capybara. The armour fragments were from the Glyptodon, a huge armadillo as Darwin had initially thought. These extinct creatures were closely related to living species in South America.

In mid-December Darwin moved to Cambridge, to organise work on his collections and rewrite his Journal. He wrote his first paper, showing that the South American landmass was slowly rising and, with Lyell’s enthusiastic backing, read it to the Geological Society of London on 4 January 1837. On the same day, he presented his mammal and bird specimens to the Zoological Society. The ornithologist John Gould soon announced that the Galapagos birds that Darwin had thought a mixture of blackbirds, “gros-beaks” and finches, were, in fact, twelve separate species of finches. On 17 February Darwin was elected to the Council of the Geographical Society and Lyell’s presidential address presented Owens’s findings on Darwin’s fossils, stressing geographical continuity of species as supporting his uniformitarian ideas.

Early in March, Darwin moved to London to be near this work, joining Lyell’s social circle of scientists and savants such as Charles Babbage, who described God as a programmer of laws. John Herschel’s letter on the “mystery of mysteries” of new species was widely discussed, with explanations sought in laws of nature, not ad hoc miracles. 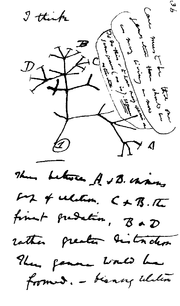 In mid-July 1837 Darwin started his “B” notebook on Transmutation of Species, and on page 36 wrote “I think” above the first evolutionary tree (see left).

In their first meeting to discuss his detailed findings, Gould told Darwin that the Galápagos mockingbirds from different islands were separate species, not just varieties, and the finch group included the “wrens”. The two rheas were also distinct species, and on 14 March Darwin announced how their distribution changed going southwards.

By mid-March, Darwin was speculating in his Red Notebook on the possibility that “one species does change into another” to explain the geographical distribution of living species such as the rheas, and extinct ones such as Macrauchenia like a giant guanaco. His thoughts on lifespan, asexual reproduction and sexual reproduction developed in his “B” notebook around mid-July on to variation in offspring “to adapt and alter the race to changing world” explaining the Galápagos tortoises, mockingbirds and rheas. He sketched branching descent, then a genealogical branching of a single evolutionary tree in which “It is absurd to talk of one animal being higher than another”, discarding Lamarck’s independent lineages progressing to higher forms.