It is a well-known fact that the Cathars were vegetarians. To be more precise the Parfaits were vegetarians. They refrained from eating meat and dairy produces but they ate fish. This seems strange at first but there is a simple explanation even if it is not convincing any more. The Cathars in effect refrain from everything that had to do with sex and even the result of sexual relations. This explains why they did not eat meat and dairy produces. They ate fish because at that time people thought that fishes were not reproduced by sexual relations (e)

The “Parfaits” refusal to eat meat and dairy products came from their belief in dualism. The world, in their view, was made of two opposed principles of Good and Evil. The Devil created the world and the matter and God created the Spirit.

Man was of course living in the Devil world but had also a divine spirit inside him. A detachment from the material world meant an approach to the Divine. The creation being bad, it was therefore not a good thing to procreate. Everything coming from procreation was impure. Strict asceticism was only required from the “Parfaits”. This contrasted with the depravity of the Roman Catholic Church. (e)

The Cathars were for the equality between men and women. This was so well implanted in the South West of France that even inheritance was passed through women as well as men. The Cathars had woman priests and Parfaites. For example Esclarmonde, daughter of Roger-Bernard one of the Count of Foix became a Parfaite after her husband died. She received the “Consolamentum” in 1205 when she was 50 years old. For a long time she was recognised as the more holy woman among the Cathars. The youngest son of Roger-Bernard, Raymond-Roger took his mother’s name, Trencavel. This was a common practice. He became one of the best-known defenders of the Cathars. Roger-Bernard eldest son succeeded him as Count of Foix. He released his wife Philippa from their marriage so that she could become a Parfaite. He had to “release” her, as at that time wife were subject to their husband. However he respected her wishes and lets her choose her own way. Philippa became the head of a Cathar hospice. The hospices were place of religious instruction for Parfaits and candidates Parfaits. They also gave shelter to Good Men on their preaching travels. Widows and orphans of believers were also taken care of here. It is also well known that it was mainly women who passed the Cathar faith and traditions in most families. (e)

In the 14th century only one Parfait, Belibaste, was recorded as still alive. He lived, as an adult, at the beginning of the 14th century, about 100 years after the crusades against the Albigenses. 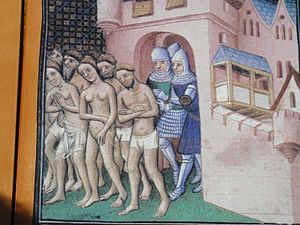 It is well known that Catharism did not disappear completely as a result of the Inquisition and the Crusades. It was still passed from generation to generation within the family circles. In addition we must remember that the Inquisition never stopped. Belibaste was probably born near Andorra in 1280 in a good family and he worked as a shepherd. When he was 17 or 18 he killed another shepherd and he was forced to hide. In fact he hid with the Cathars. He was sent to Rabastens to study during three or four years to become a Parfait. It was a normal procedure for a Cathar who had committed a crime to become a Parfait. It was the only way for a killer to save himself for eternity. Belibaste started to preach but he was arrested as a heretic in Carcassonne. He managed to escape by bribing the guards before coming in front of the Inquisition. He escaped to Perpignan and the to Spain. Belibaste worked again as a shepherd making cheese. He participated in the transhumance. At one point he was also making combs for weaving looms. Belibaste, although a Parfait, had always women around him. He lived scandalously with Raymonde whose brother had been a Parfait, was arrested and burned. He said that he never touched her and that they slept together fully dressed! Belisbaste obliged Raymonde to marry his best friend Pierre Maury when she was already pregnant. Belibaste was obviously the father and Maury knew but he married her to protect his friend’s reputation. The Cathar women had an important role to play. The men were arrested more often that women but it was really the women who were the true believers. In a sort of way the men were marginal. The women would preach like the men, become “Parfaites”, inherit from their fathers and even give their name to their husband. The Inquisition finally arrested him. He was found guilty and was burned at the stake in Villerouge-Terménès in 1321. (e)

Many Cathars Parfaits were healers. They used rocks and crystals in their healing activity. (e)

The Parfaits were travelling all the time to meet people and preach to them. They were also working manually and in this way they were fully integrated in the social structure. During the crusades and after they were risking their life to preach to the believers. One can say that they were not retiring from the world. The opposite is true. They were firmly attached to their faith and were following the commitments taken with the Consolamentum. When they met their enemies they chose not to renounce to their faith. In relation to the two or three thousand Parfaits burned at the stake only a maximum of three adjured their religion. This behaviour is difficult to explain. The courage they showed in front of death can only be the result of their long live of “ascese” and contemplation that convinced them that saving their soul was far more important that saving their material body. (a)