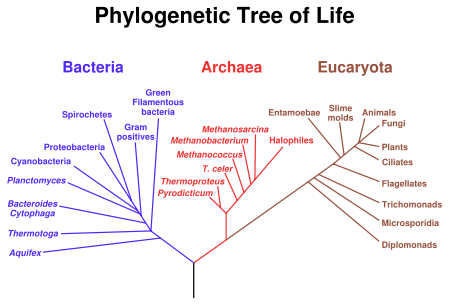 A cladogram linking all major groups of living organisms to the LUA (the black trunk at the bottom). This graph is derived from ribosomal RNA sequence data.

The last universal ancestor (LUA, also called the last universal common ancestor, LUCA, the cenancestor or “number one” in slang) is the most recent organism from which all organisms now living on Earth descend. Thus it is the most recent common ancestor (MRCA) of all current life on Earth. The LUA is estimated to have lived some 3.5 to 3.8 billion years ago (sometime in the Paleoarchean era).

13.10.2 Features
Based on the properties shared by all independently living organisms on Earth:

In a tree data structure where each node points to its parent, the lowest common ancestor can be easily determined by finding the first intersection of the paths from v and w to the root. In general, the computational time required for this algorithm is O(h) where h is the height of the tree (length of longest path from a leaf to the root). However, there exist several algorithms for processing trees so that lowest common ancestors may be found more quickly, in constant time per query after a linear time pre-processing stage.

Baruch Schieber and Uzi Vishkin (1988) simplified the data structure of Harel and Tarjan. Their simplification is based on the principle that, in two special kinds of trees, lowest common ancestors are easy to determine:

–          If the tree is a path, then the lowest common ancestor can be computed simply from the minimum of the levels of the two queried nodes.

–          If the tree is a complete binary tree, the nodes may be indexed in such a way that lowest common ancestors reduce to simple binary operations on the indices.

The structure of Schieber and Vishkin decomposes any tree into a collection of paths, such that the connections between the paths have the structure of a binary tree, and combines both of these two simpler indexing techniques.

Omer Berkman and Uzi Vishkin (1993) discovered a completely new way to answer lowest common ancestor queries, again achieving linear pre-processing time with constant query time. This method was later rediscovered and simplified by Michael Bender and Martin Farach-Colton (2000). As had been previously observed by Gabow, Bentley & Tarjan (1984), the range minimum problem can in turn be transformed back into a lowest common ancestor problem using the technique of Cartesian trees.

–          The role of developmental plasticity in evolution

–          How ecology impacts in development and evolutionary change

–          The developmental basis of homoplasy and homology.

The contemporary field of evo-devo has gained impetus from the discovery of genes regulating embryonic development in model organisms. General hypotheses remain hard to test because organisms differ so much in shape and form. Nevertheless, it now appears that just as evolution tends to create new genes from parts of old genes, evo-devo demonstrates that evolution alters developmental processes to create new and novel structures from the old gene networks or will conserve a similar program in a host of organisms. Initially the major interest has been in the evidence of homology in the cellular and molecular mechanisms that regulate body plan and organ development. However more modern approaches include developmental changes associated with speciation.