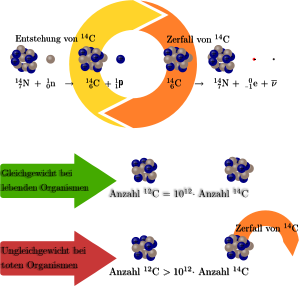 Radiometric dating requires that neither the parent nuclide nor the daughter product can enter or leave the material after its formation. The possible contamination of parent and daughter isotopes have to be considered, as do the effects of any loss or gain of such isotopes since the sample was created. Precision is enhanced if measurements are taken on multiple samples from different locations of the sample to test. If several different minerals formed by the same event can be dated from the same sample they should form an isochron. This can reduce the problem of contamination. Finally, correlation between different isotopic dating methods may be required to confirm the age of a sample.

– The parent has a long enough half-life that it will be present in significant amounts at the time of measurement.

– The procedures used to isolate and analyse the parent and daughter nuclides must be precise and accurate.

The precision of a dating method depends in part on the half-life of the radioactive isotope involved. For instance, carbon-14 has a half-life of about 6000 years. After an organism has been dead for 60,000 years, so little carbon-14 is left in it that accurate dating has not been established. On the other hand, the concentration of carbon-14 falls off so steeply that the age of relatively young remains can be determined precisely to within a few decades.