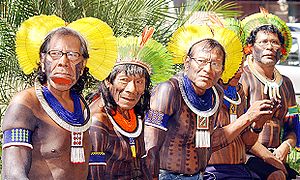 The indigenous peoples of the Americas are the pre-Columbian inhabitants of North, Central, and South America, their descendants, and many ethnic groups who identify themselves with those peoples. They are referred to as Native Americans, Aboriginals, First Nations, Amerigine, and by Christopher Columbus‘ geographical and historical mistake, Indians. Now they are generally known as the American Indian race, American Indians, Amerindians, Amerinds, or Red Indians.

It is now believed that a migration of humans from Eurasia to the Americas took place via Beringia, a land bridge which connected the two continents across what is now the Bering Strait. This migration must have taken place before c. 12,000 years ago, with the earliest period remaining a matter of some unresolved contention. These early Paleo-Indians soon spread throughout the Americas, diversifying into many hundreds of culturally distinct nations and tribes.

Application of the term “Indian” originated with Christopher Columbus, who thought that he had arrived in the East Indies, while seeking Asia. Later the name was still used as the Americas at the time were often called West Indies. Once created, the unified “Indian” word was codified in law, religion, and politics. The unitary idea of “Indians” was not originally shared by indigenous peoples, but many over the last two centuries have embraced the identity.

While some indigenous peoples of the Americas were historically hunter-gatherers, many practices aquaculture and agriculture. Some societies depended heavily on agriculture while others practised a mix of farming, hunting, and gathering. In some regions the indigenous peoples created monumental architecture, large-scale organized cities, chiefdoms, states, and massive empires.

Many parts of the Americas are still populated by indigenous Americans; some countries have sizeable populations, such as Bolivia, Peru, Paraguay, Mexico, Guatemala, Colombia, and Ecuador. At least a thousand different indigenous languages are spoken in the Americas. Some, such as Quechua, Guaraní, Mayan languages count their speakers in millions. Most indigenous peoples have largely adopted the lifestyle of the western world, but many also maintain aspects of indigenous cultural practices to varying degrees, including religion, social organization and subsistence practices. Some indigenous peoples still live in relative isolation from Western society, and a few are still counted as non-contacted peoples.