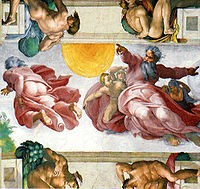 Michelangelo‘s painting of the ceiling of the Sistine Chapel shows the creation of the stars and planets as described in the first chapter of Genesis.

Genesis 2 is a simple linear narrative, with the exception of the parenthesis about the four rivers at Genesis 2:10-14. This interrupts the forward movement of the narrative and possibly is an expansion on the spring or stream mentioned in Genesis 2:6. The two are joined by Genesis 2:4a. This echoes the first line of Genesis 1, “In the beginning Yahweh created both the heavens and the earth,” and is reversed in the next line of Genesis 2, “In the day when Yahweh Elohim made the earth and the heavens…”. The significance of this, if any, is unclear, but it does reflect the preoccupation of each chapter, Genesis 1 looking down from heaven, Genesis 2 looking up from the earth.

According to the Jewish tradition the first five books of the Bible were written by Moses. Today virtually all scholars accept that the Pentateuch “was in reality a composite work, the product of many hands and periods.”

Differences among Priestly and Yahwist accounts of creation are said to include these: